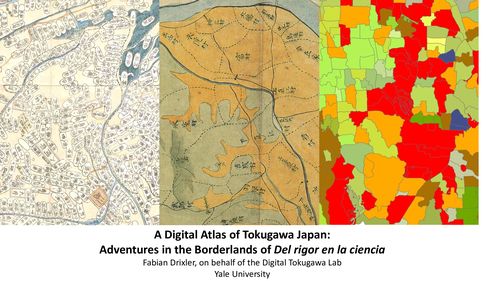 “A Digital Atlas of Tokugawa Japan: Adventures in the Borderlands of Del rigor en la ciencia“

Since 2019, Yale’s Digital Tokugawa Lab (core members: Floris van Swet, Werner Stangl, Yuki Hoshino, Henry Barnes, and Fabian Drixler) has labored to create a first comprehensive atlas of the territories of Tokugawa Japan. We trace changes in feudal ownership across 70,000 villages from 1600 to 1871, and display them as a time series of zoomable maps.

For better and for worse, the result will be a cartographic vision different from any accessible to those who lived in those villages or in the castles that ruled them. Villagers knew exactly where one territory ended and another began, in shapes that could look like the proboscis of a butterfly or lily pads on a pond. In the castles, the administrators’ view had a wider angle, but reduced each village to a color-coded oval on a map or a line of writing in a list. Our maps span these two perspectives, like a portrait of a person stitched together from microscope images of her skin. It draws on thousands of historical maps, but is itself a different kind of artifact. We hope that it can serve as a piece of infrastructure for other history projects: making it fast to create new thematic maps with speed and accuracy; opening a window onto how individuals experienced the spaces they inhabited or traversed; revealing hidden patterns of the Tokugawa polity; and enabling new estimation techniques in quantitative history.

A first publishable version should be ready this year, but already now, the work has thrown up many questions as well as some lessons. Every dimension we care about has turned out to be fractal, with areas of uniformity flowing into areas of persistent complexity at every level of magnification. Most villages are easy to define, but some flicker in and out of existence. Most domains are easily identified. But with some, reasonable people can disagree on whether they were in fact separate entities. Even in domains without such ambiguities, some are compact, solid, and easily drawn. Others dissolve into a spray of scattered villages, or a parcels of land in a village shared with one or two or a hundred other feudal owners. Temple lands range from territorial states like Kōyasan to the vegetable patch of a local Kannon hall, recognized by the shogunate with the same vermillion seal. The land itself is unstable. Rivers changed their course, coasts receded, and the occasional settlement was swallowed by the sea. Even our time dimension resists standardization. Our events can be dated to the day in many cases, but in some, the uncertainty spans decades.

In this talk, I will retrace some of the logistical and intellectual challenges of conducting a collaboration of such scope and granularity, on a polity that can seem determined to mock the efforts of cartographers and their need for defensible categories. I will review some of technologies we used to create our databases and maps, including natural language processing and neural nets. And I would love to hear from you what we can do to make this map useful to your research. 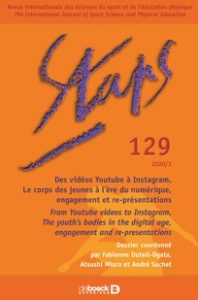